“Super Sized” in Paris; It Does Exsist

One of the first culture shocks I experienced when moving to Paris was the, “where’s the rest of it” experience. This question came with every drink, coffee and breakfast I ordered. The “petite” French life style they say exist is one stereotype that is an overwhelming reality.

The only places to get more than a 2oz cup of coffee, Starbucks and McDonald’s, of course and beers start at 25cl. Some places don’t even give you a larger option and soda’s only come in one size, barely there with no refills. This trend seemed to be the same for most meals except dinner but beverages and breakfast especially. Dinner is the largest meal of the day, which makes sense since you have to eat after the, “The French breakfast”. This breakfast normally consists of a croissant, baguette with butter and jam, juice and of course, cafe. Coffee refills are laughable in most restaurants unless you plan on paying another 2,50 euro for your 2oz.  Though this downsizing took awhile to get used to, (especially the beverages) I have to admit, I eventually welcomed the change. You grow to savor and enjoy every bite, sip, which most American’s were never taught how to do. When lunch and dinner come, you have plenty of time to bulk up as these meals take just as long as watching an opera.

Though I became accustomed to this transition, four months into my “petite” mornings, I was starting to really miss my weekend tradition of a huge, “super sized” brunch. $10 all you drink Mimosa’s, blood mary bars lined with 17 different types of olives, hot sauces and shrimp, 5 egg omelets stuffed with red bliss potatoes, is what I new only as Sunday brunch. It was my favorite day of the week and the perfect solution to the weekend hangover. However, moving to France, the idea of Sunday brunch was not as appreciated the way I was used to it. Though there are many places that offer brunch, not exactly what I was used to.

When moving to the 17th arrodisment, I was hit with the craving when I passed by a colorful, cute, trendy cafe called, Sans Gene. The front glistened with a “brunch” sign outside and patrons were drinking the biggest beers I have ever seen in Paris. This reminded me a lot of Snooze back in the US, which hosts one of the longest running brunch lines in the west. So, immediately I gather my friends and headed over for to try a taste of home. 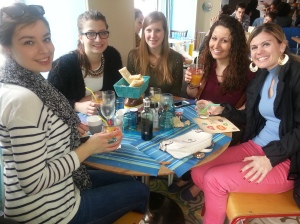 Enjoying with friends, how I know Sunday brunch

Friendly staff, trendy decor with an eclectic atmosphere greeted us for a Sunday brunch I had been anxiously waiting for. Sans Gene offers a 24 euro brunch with unlimited coffee or hot chocolate, bottomless juice, traditional French basket of breads, a beautifully sectioned plate with a bacon and egg English Muffin sandwich (which I have not even seen those sold yet in France) salad, fromage, spring rolls and even a choice of dessert. Since, I don’t eat meat, they were kind enough to substitute salmon for me.

Part of our new upgraded brunch

This masterpiece brunch was absolutely delicious and more than satisfying for the price. The best part was the jar of Nutella they put in the middle of the table for your baguette. A necessity, I learned here in France. Afterwards we sat and had their great selection of cocktails, which start at only 6,50 euro. Don’t feel like you have to rush to wake up or you will miss brunch. Brunch is served until 6pm!

If you stay or want to come back another day, ensure to get one of their massive draft beers for happy hour. Happy hour is from 5pm-8pm everyday and the place is always jamming with local people, it makes you finally feel like a real Parisian!

So, if you want to get out of the mobs of tourists and are craving your American sized beers and brunch, then Sans Gene is a do not miss on your list! Metro Stop: La Fourche, Line 13 http://www.sansgene.fr