In the basking hot sun, the Parisian masses came out yesterday to watch the final match between Rafael Nadal and Novak Djokovic for Roland Garros-The French Open. Just as you would in your living room, but with a way better view, Parisians filled the lawns of Champ de Mars park. Shirtless men and women with large sun hats, attempted to survive the heat as they watched their favorite tennis pro’s on the big screen with the Eiffel Tower creating a surreal backdrop. 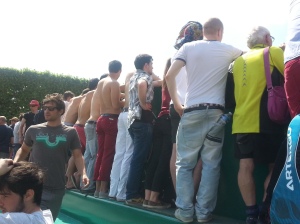 Throughout the entire two weeks of the The French Open, which began on May 25th, Champ de Mars was prepared for viewers to watch all the matches with a huge screen TV. Booths selling your favorite Roland Garros gear were set, security on call and to commence it all…….a giant tennis ball in the middle of the Eiffel Tower! True marketing at it’s best. Though I have to admit, it was kind of an eye soar. If it was my first time in Paris, I would not want a Roland Garro’s tennis ball in my family photo. 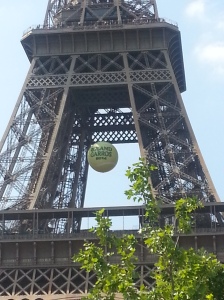 While the games were played at the courts of Porte d’Auteuil, many were deceived that the games might be played on the court in Champ de Mars. The tennis court set on the other side of the lawn was used primarily for press releases and a chance for locals to play on! As I live only a minutes walk from the park, I thought I needed to snap a million photos when I saw two men playing on the court. However, I realized, with no crowds around, they were locals catching up on a lunchtime match to get their feel as a pro. Pro or not, it is pretty awesome to be playing tennis, in Champ de Mars, in front of the Eiffel Tower.

As a neighbour to the park, I watched a few games on the big screen with the small amount of locals who brought picnics during the two weeks. However, yesterday was the big game and just as it would be for the Super Bowl, everyone brought their biggest feasts, national flags and all their friends to find spots where they could get the best view. Most scattered along under the trees to stay out of the boiling sun but it was the busiest I have ever seen Champ de Mars. As a regular picnicker there, night and daytime, I was not going to miss out on the biggest event. My roommate and I did not hesitate to gather our normal arrangements to cheer on with the masses.It is days like these I feel so lucky to be a neighbour of Champ de Mars. Though extremely busy at times, it gives you that “awww” moment as you stare up at the Eiffel Tower, anytime of the year. 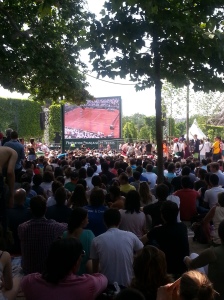 Relief from the sun

If you are in town for the 2015 French Open ensure to grab a tennis racket, your blanket and pack a picnic, with wine of course, to watch the  matches at Champ de Mars. One thing I know for sure this year is, I am ready for to have “tennis ball-less” Eiffel Tower pictures again.

Like Loading...
← Why Ryanair is not the worst airline in the world
Best Places to Watch the 2014 World Cup in Paris →