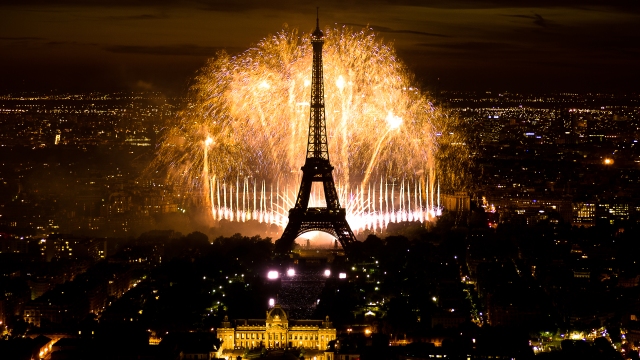 July is the month of proud and revolutionary holidays. As the USA commences their independence on July 4th, France prepares for their proudest and most celebrated holiday on July 14th, Bastille Day (English) or La Fete Nationale (French) This French national holiday has been so gloriously celebrated in France since the 1700’s, that it has created festivities all over the world.

Bastille Day is the celebration commemorating the beginning of the French Revolution on July 14th, 1789 and the Fete de la Federation on July 14th, 1790. The history of the Storming of the Bastille on July 14th, 1789, was the take over of the Bastille prison by  French revolutionist in central Paris. The prison which represented the overpowering monarchy and absolutism, was raided by the revolutionists primarily for take over of ammunition and freeing of the 7 prisoners inside. This bloody capture of what was a symbol of the king’s power lead to the revolution and eventually the republic of France.

The Fete de la Federation was the first celebration on the one year anniversary of the Storming of the Bastille and the uniting of the French nation. The original celebration which lasted four days lead to the modern day celebration we are thrilled to be enjoying today, La Fete Nationale.

Now, in 2014, Paris has a lot to celebrate and I plan on being apart of every single moment! As I have celebrated Bastille Day several times in the US, I beyond thrilled to finally be experiencing this amazing tradition at the source. So, what are the plans and where are the places to feel the greatest experience? The answer is everywhere! However, if you are a first timer like myself, there are some essentials you have to do your first year celebrating on French territory.

There are events kicking off the weekend all over the city but as a first timer, here are the “must dos” to truly turn your traditional Bastille Day into La Fete Nationale.

Le Festival Soirs d’ete Ou. These free concerts on Republique square beginning Friday night at 9pm is a great way to get your weekend started. Live and high energy band from all over France will have you ready to celebrate all weekend long. Grab a beer and some amazing food from one of the street vendors before heading over for great music and a great crowd. www.sortiraparis.com

Paris Cinema Festival. Enjoy the last day of the Paris film festival this Saturday for the all evening films across Paris. There are several films been shown starting at 5pm at Gaumont Opera theater but the main closing film will be the 1965 classic, Paris Seen by…… at 10:30pm. The film will be shown at the outdoor theater at Les Berges but as the weather is supposed to be pretty chilly and wet, check the website for further information. www.pariscinema.org

Les Bal des Pompiers. No matter what every bar and club will be party central this Sunday but if you are a first time you must attend one of the traditional Fireman’s Ball. Every fire station in Paris opens their doors to the public for a larger than life celebration. Though entrance is free, donations are greatly appreciated for this party  that is nothing less than an all night Parisian extravaganza. Dancing, great food, drinks and some even with a fireman strip tease….um, yes please, will have you out till the wee hours of the morning! Each arrondissement hosts their own ball and for a full list of locations, here is the Visitor’s bureau website. www.en.parisinfo.com

Military Parade. The holiday officially begins with the oldest military parade in Europe since 1880, giving honor to the revolutionist who led France to victory. The parade begins 9am in Champs-Elysees from the Arc de Triomphe to Place de la Concorde, concluding with the entrance of the President of the French Republic around noon.

Afterwards, enjoy an afternoon picnic or tour around the city before heading over to see the concert at Champ de Mars. The night begins with a live symphony at 9pm leading into the grand fireworks display at 11pm. Though the weather is schedule this year to not be firework friendly, still plan on an enormous crowd and heading to the park as early as possible. Otherwise, grab a high point or even a rooftop to enjoy the glorious spectacle over the Eiffel Tower that represents this incredible national holiday.