The Do’s and Dont’s of Oktoberfest, Munich 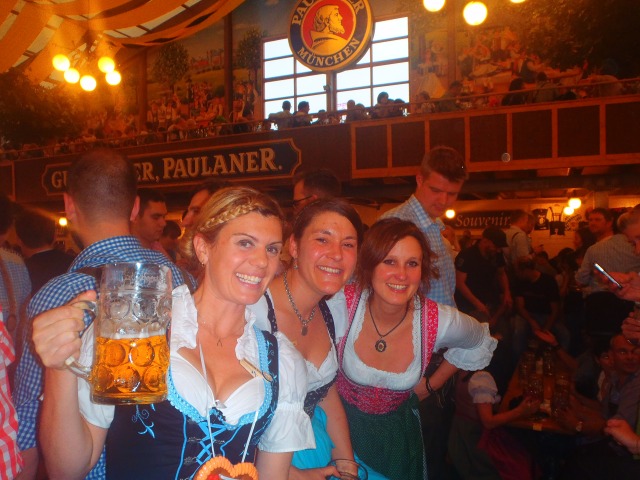 As a visitor of this journey with me through Paris, you may be expecting to only find information regarding the “City of Lights” Where to eat, what to do and see how I have experienced Paris through my footsteps. However, the best part about living in Paris is the accessibility to travel all over Europe not only within a close range but also, for cheap. I have been privileged to visit many cities such as Brussels, Zurich, Barcelona and now Munich. This time, the visit was not just for a tour of the city but to experience the biggest and best beer drinking festival in the world, Oktoberfest. 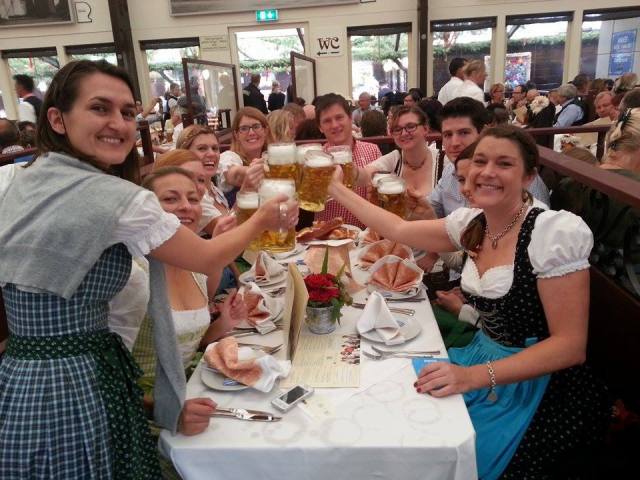 Oktoberfest has been one of my bucketlist items since the day I discovered beer was even a beverage. In the United States, every major city along with every little town in the woods, tries to replicate this over 200 year old tradition. Though, the Oktoberfest parties in the US have now become one of my favorite parties of the year, there is nothing like obtaining this enormous badge of honor where you can say, “Oh, yea, I have been to Oktoberfest in Munich” 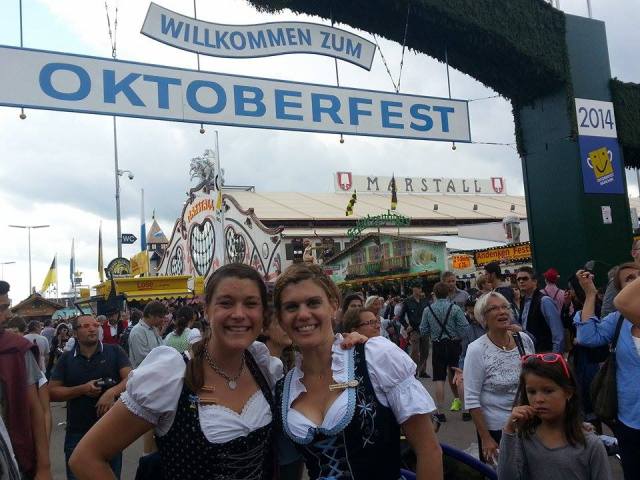 Since the US has slowly transformed European festivals such as Oktoberfest over the years into the crazy American version that we now see as “normal”, it is difficult to decipher what is tradition and what is not. When moving to Paris this year, Oktoberfest was one bucketlist item that I needed to cross off in 2014. Through my travels over the past two years, I made a wonderful friend from Munich who made it clear, “You have to come to Oktoberfest” Though I had heard from many Germans, that Oktoberfest was really just for tourists, she assured me that was not the case. Yes, the place is swarmed with Australians, Americans and Brits but if you get the opportunity to have the local tour like I did, then you will truly experience Oktoberfest the way it is supposed to be. 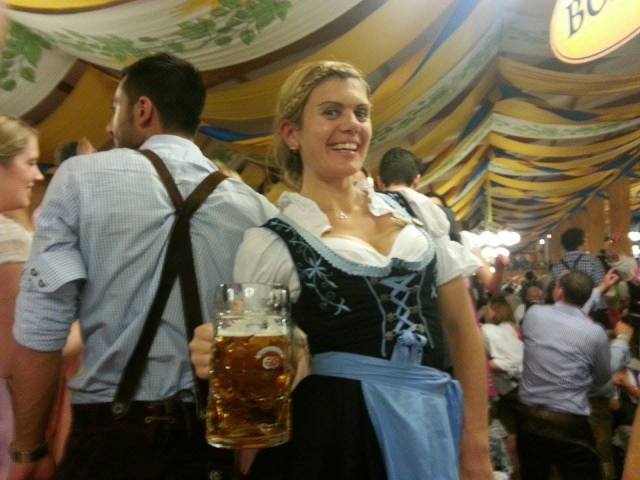 Dancing on the tables, singing traditional German (and American) songs, eating loads of Bavarian pretzels, random make out sessions and drinking a kegs worth of beer in 3 hours is all what I imagined Oktoberfest would be. Thankfully,  it was all that and more! The best time to go to Oktoberfest is the opening weekend. The first Saturday, has the most festivities and the most excitement. The kickoff parade starts at 10:30am which escorts the route of German celebrities, horse-drawn carriages, bands and lots and lots of beer. Once, the parade makes it’s way through the fairgrounds, it all leads up to the opening of the first barrel of beer. No beer is served until the mayor opens this first barrel at noon,which commences the two week celebration of Bavarian culture. 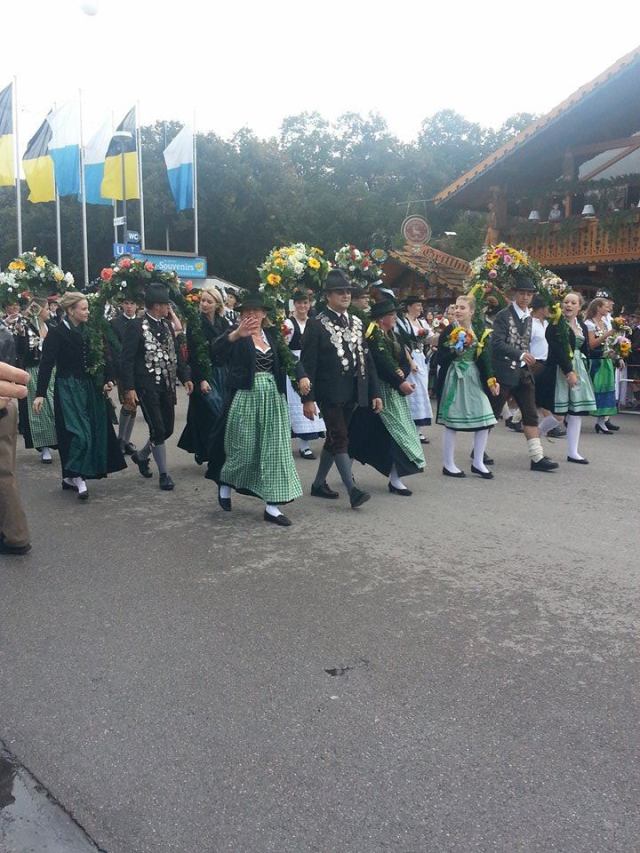 The reason I was so lucky I was weaved into a group of locals was they had a strict list of “Do’s and Don’ts” that I would have NEVER known about should I have gone to Oktoberfest 10 years ago with a bunch of American’s like it was spring break. Not to exaggerate but there were plenty of tents where it was “Bavaria Break” Some fully included with naked guys dancing on the tables. 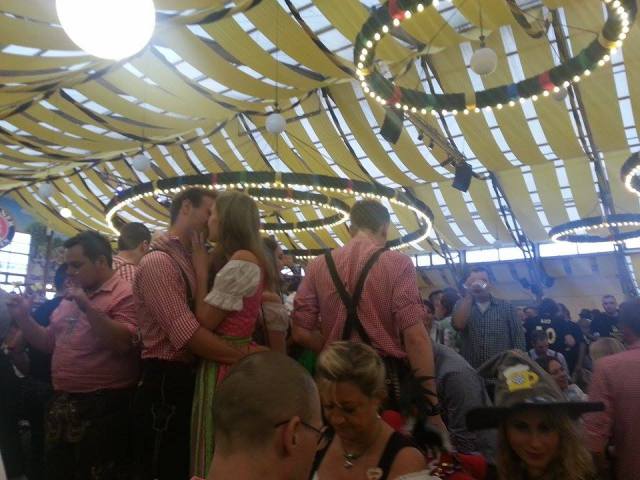 19 year old Australian’s, American’s and Brits who could not have possibly had enough training time to prepare you for that much beer at 1PM with no food. I understand why all the Bavarian food is heavy and carb loaded because otherwise you are passed out by 3PM with lederhosen straps hanging off your shoulders like a drunk girl at senior prom.

Luckily, there were tents which provided a party for all demographics. There are the tourist tents, the spring break tents, the family tents,  the locals tents, the wealthy tents, the senior tents, the gay tents and the in-between tents for those who just want to enjoy Oktoberfest but try to avoid getting smacked in the head by beer stein. 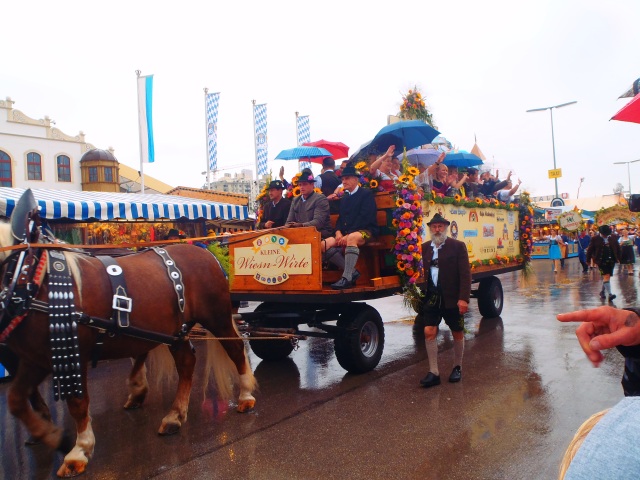 Oktoberfest itself is a massive festival not only for beer drinking but for games, rides and shopping! From Ferris Wheels to massive roller coasters, Oktoberfest has everything. Though I have to admit, going on a spinning roller coaster after 3 liters of beer seems like a death trap, many people do it and actually don’t puke. 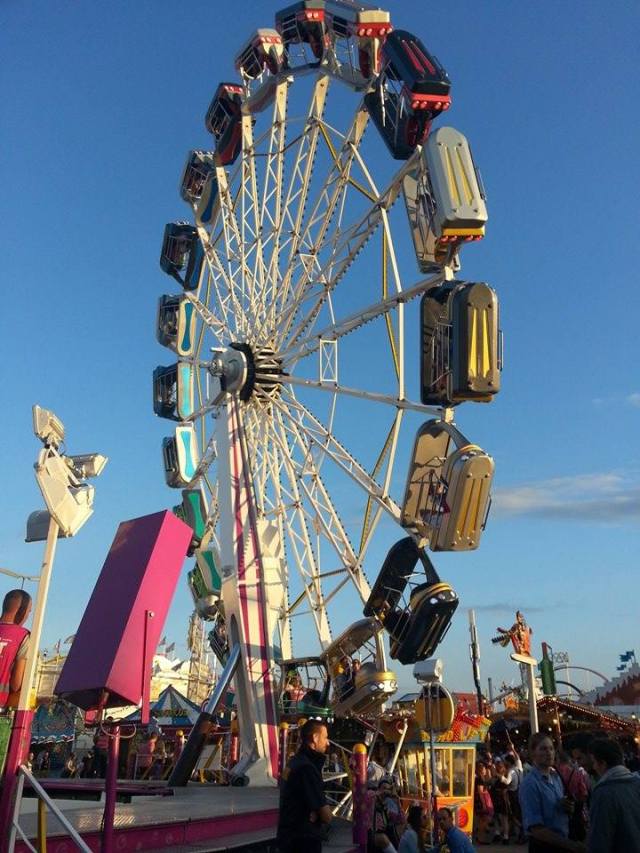 Therefore, continuing from the Tuesday’s Paris Street fashion a couple weeks ago where I introduced the “Do and Don’t” of the Oktoberfest fashion, here are the official “Do’s and Don’ts” from my first Oktoberfest experience with the Munich locals. I was forever gracious to my German host who gave me the full Oktoberfest experience while ensuring, I not only got home alive but I did not stand out like a tourist. I am already training for next year’s Oktoberfest and this time with a bit more insight. This is a party that everyone has to experience at least once in their life, no matter what age you are.

1. Where a proper dirndl. German women are very specific about the length and the presentation of a traditional dirndl. As American’s we assume the St.Pauli’s girl costumes we see for Halloween is more than appropriate for Oktoberfest. However, if you were any dirndl that is above the knees or without the appropriate apron….just know you will be posted on Instagram faster than you can finish your first beer as a “What not to wear” 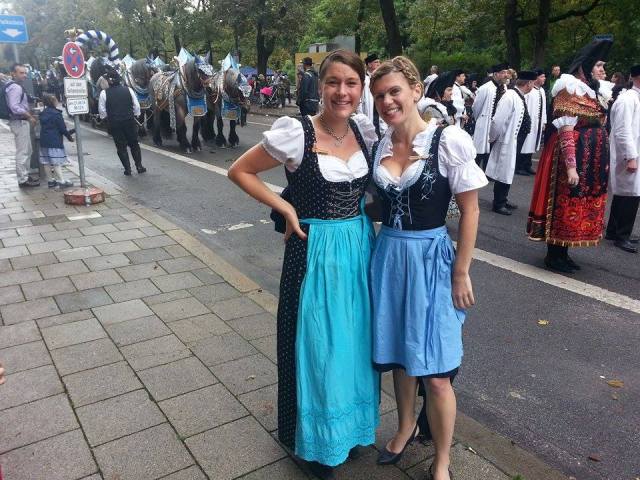 2. Attend the first weekend. The kickoff parade is at 10:30am through the festival fairgrounds followed by the Oktoberfest beer commencement at 12pm and on Sunday there is a second parade beginning at 10am through the streets of Munich finishing at the festivals fairgrounds around 1pm. The first weekend gives the true experience because everyone is extremely excited, there are masses of people and the first Saturday is where all the real “encounters” happen. 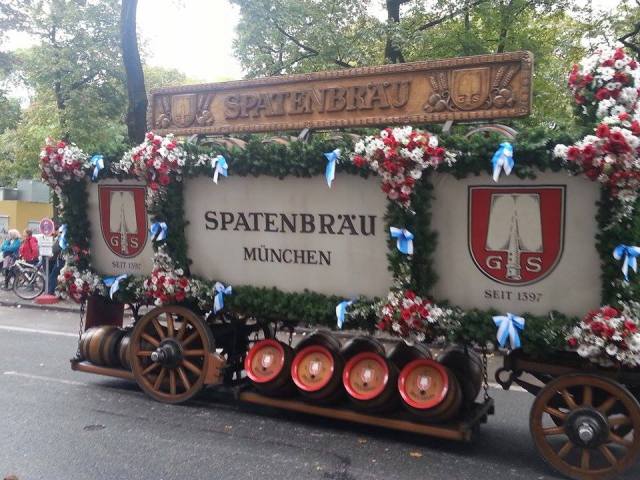 3. Buy an engraved clothespin. What may look like a name tag from afar, gathering a clothespin with a saying and a cute Oktoberfest symbol is a must to make your dirndl officially German. My friend says she gets one every year to add to her collection and as for myself at my first Oktoberfest, it made the perfect souvenir. So what saying did I chose? Of course, “Bucketlist 2014” 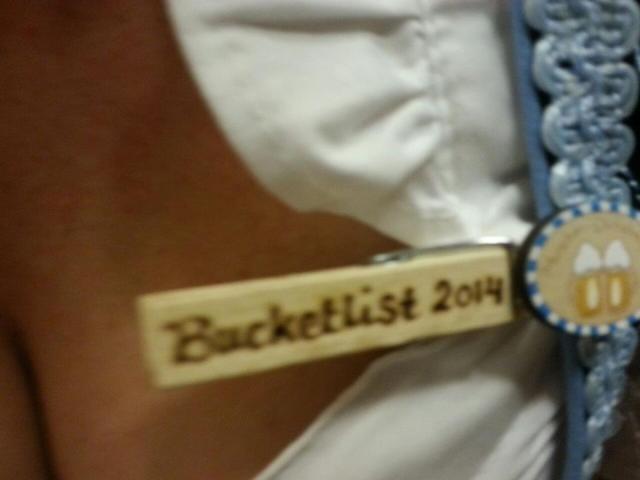 4. Snort the White Stuff. What I assumed was cocaine being passed around completely in public, at first did not come as a surprise to me at this big of a party . However, the “white stuff” was not illegal at all, but a minty replacement for gum. This minty powdered sugar is snorted up your nose for a quick refresher so instead of chewing piece of gum or having a mint mid-way, you have alternative without ruining your beer taste!

5. Buy a heart-shaped gingerbread cookie. Stand after stand, you will see vendors selling heart-shaped cookies with ribbons around them to be used as a necklace. All have different German sayings such as, “You are my sweetheart” “I love you” or just “Oktoberfest 2014”  Some are more aggressive which come in handy for the boys later on in the evening when looking for their “catch” of the night but you choose where you want your Oktoberfest headed. This colorful and tasty addition to your Oktoberfest uniform, also makes another great souvenir. 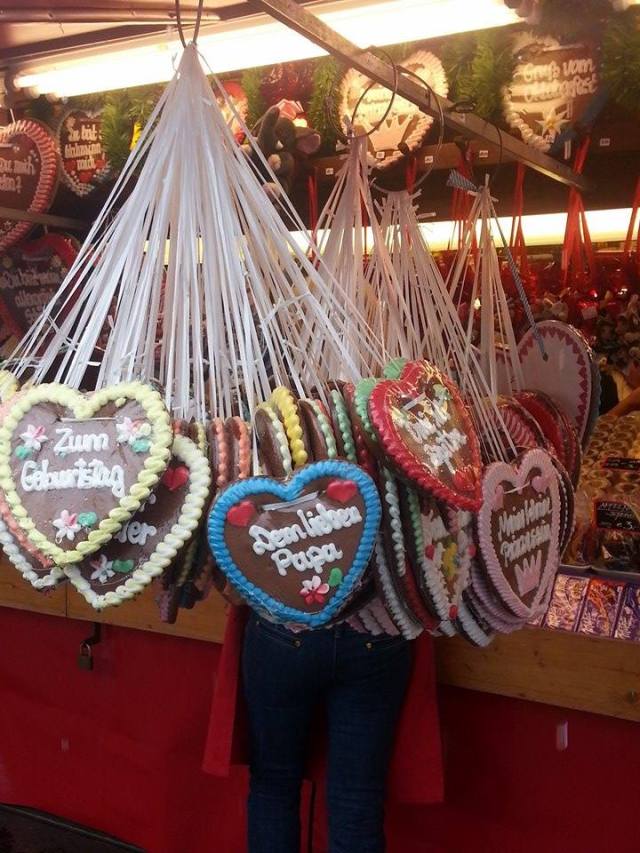 6. Head to the Lost and Found area. I was told that the lost and found area of Oktoberfest becomes sort of museum by the end of the two weeks. You will not only find full dirndls and leaderhosen but costumes of all sorts plus bras, panties, crutches and many more surprises.

7. Eat your heart out! There is a lot of traditional Bavarian fare to enjoy at Oktoberfest but do not leave without having at least one Bavarian Bretzel, a true German sausage or one of the “What to Eat” listed on the bottom.

1. Don’t not wear a dirndl or liderhosen. Many coming from outside Germany still assume, “Ok, not everyone is dressing up” , WRONG! From 2 month old babies to 90 year old grandma’s, everyone is dressed in their best Oktoberfest uniform. A proper dirndl is a special part of a Bavarian woman’s closet and some spend up to 2,000 euro per dress. The men may not spend as much on their lederhosen but it is essential to own at least one. 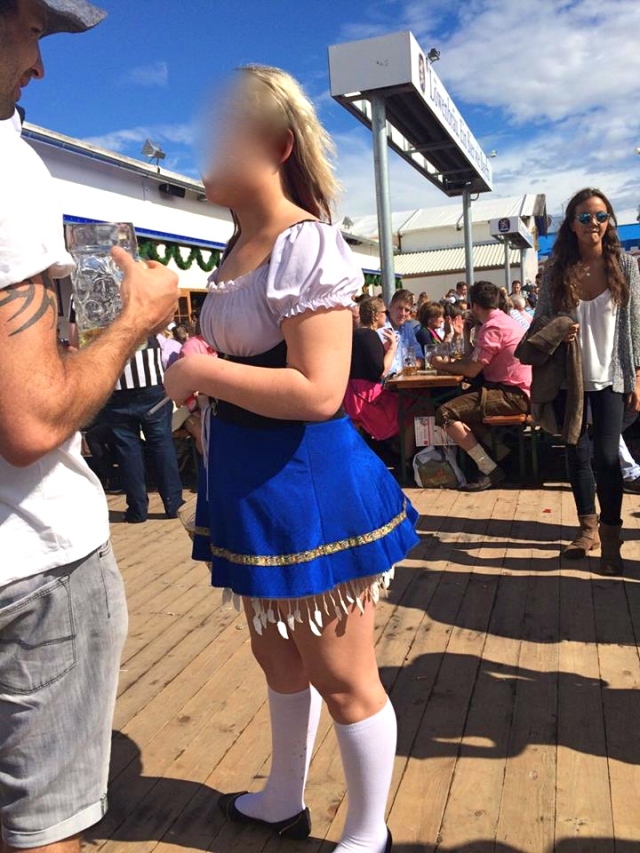 2. Don’t marry your beer! What seems like the normal custom in the US when the server wants to clear your beer and you can’t live without that last sip, is seen as one of the biggest cliché’s at Oktoberfest. When the server attempted to clear a mass before it was finished, I thought the German’s around me where about to pass out as there was an attempted marrying of the last few sips. If you don’t want to be stoned or hit in the head with a stein, just chug the rest of  your beer. 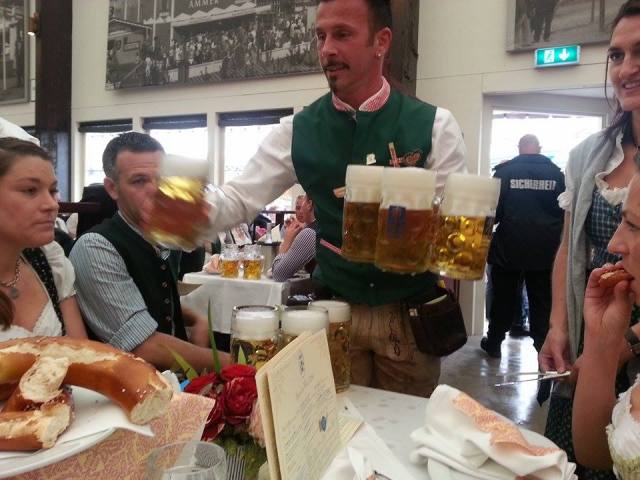 3. Don’t Disrespect the Servers. I knew I was going to be impressed by the servers who could carry several liters of beer at one time but I did not expect to be blown away. Most of the servers are older, some of the women had to be in their late 70’s, caring about 10 to 12 liters per run and deserved only the upmost respect. They take no sh*# and rightfully so. The authority they have will make or break your Oktoberfest, so obey! However, I do have to say being a server at Oktoberfest maybe the key to the fountain of youth, because they look good!

4. Don’t wear your apron bow on the wrong side. The dirndl apron bow is the essential “unspoken invitation” to tell someone whether you’re available or not. Here are the guidelines for where to wear your bow:

The good part is, if your beer goggles aren’t working yet you have the option to change quickly should the conversation take a boring down turn. “Oh, was my bow on the left, oh sorry I am dyslexic, it is supposed to be on the right” 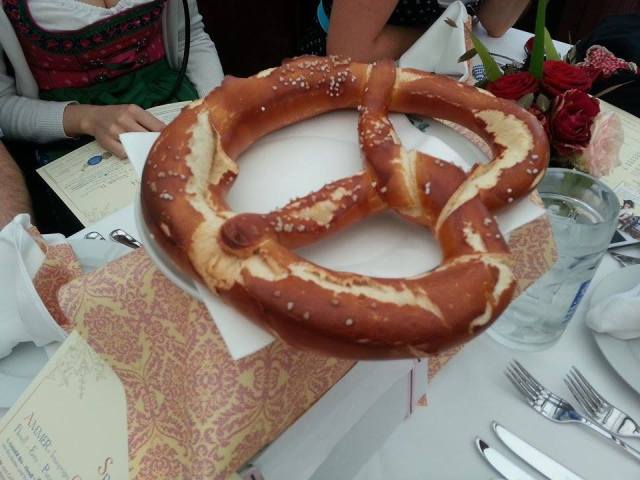 1. Traditional Bavarian Bretzel. Plain, with melted cheese, large or small, having a traditional Bretzel at Oktoberfest is a must. Not only are these delicious carb loaded delights great for absorbing the masses of beer but they are an excellent snack to grab throughout the day. 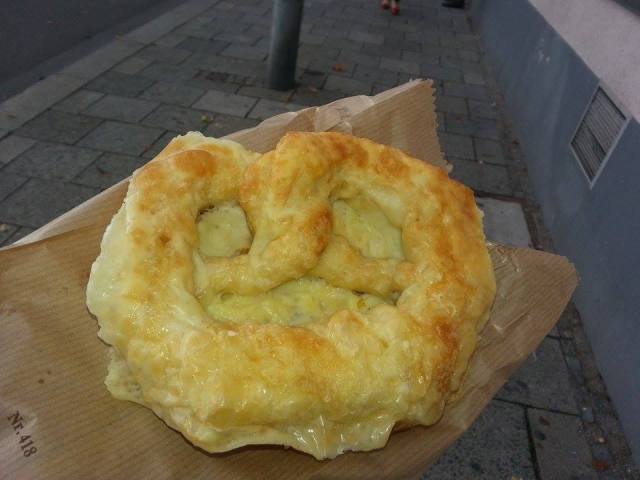 2. Roasted Chicken. According to my German friends (I am vegetarian) this is a staple Oktoberfest item you need to eat at least once throughout the weekend. They say it is one of the most delicious chickens you will ever have and is a saviour with your masses of beer throughout the day. 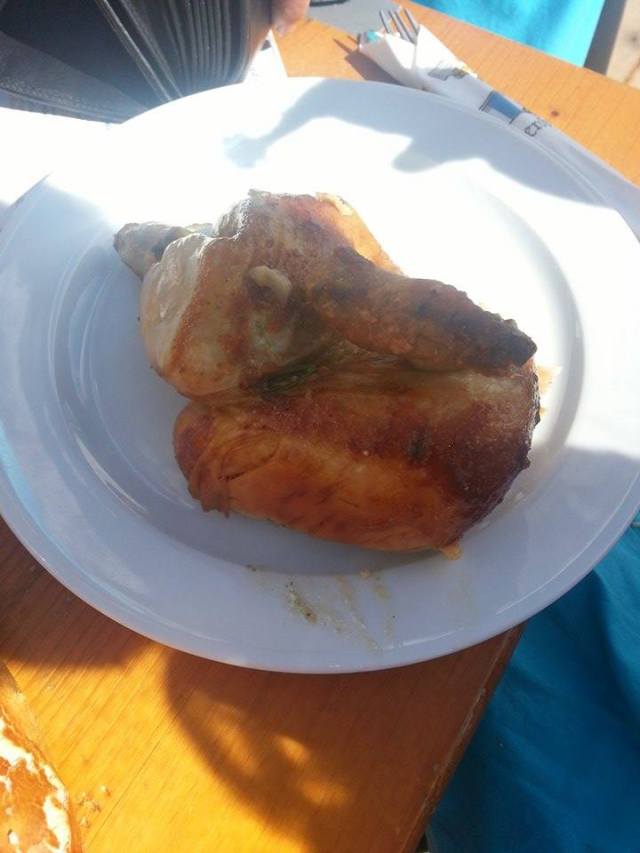 3. Obatzen. This extremely creamy cheese dip filled with shallots, chives and assortment of other delicious flavors, is another Bavarian staple. Served with the dark Bavarian bread and pretzels, it was a perfect Sunday afternoon snack. 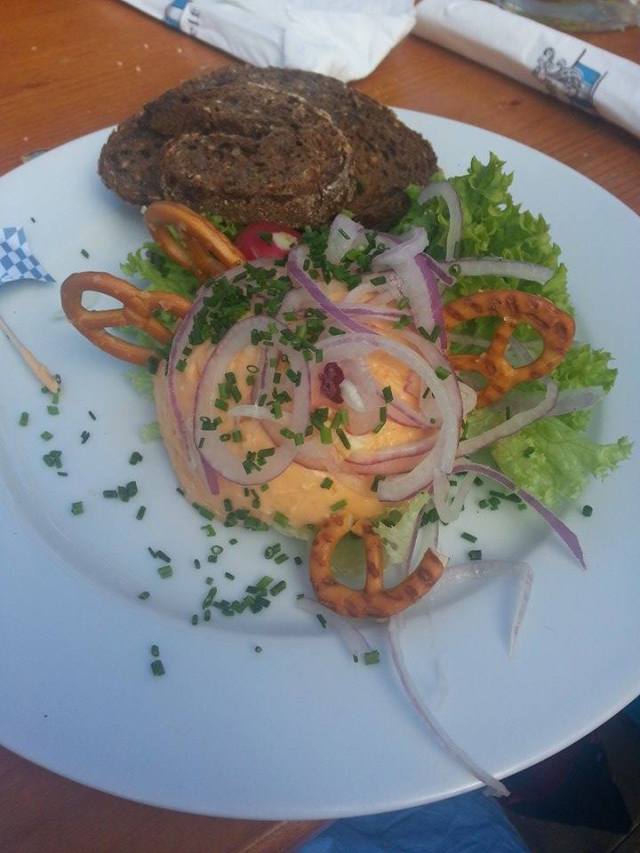 5. German Sausage. As a vegetarian, I loaded up on the delicious Bavarian carbs but I think whether you know Oktoberfest well or not, one thing you do know is German Sausage is a necessity at Oktoberfest.

6. Semmelknoedel. The ultimate vegetarian dish that provides a Bavarian alternative to the chicken and sausage. This traditional Bavarian meal which offers bread dumplings smothered in a mushroom gravy, was one of the most delicious vegetarian meals I have had in a long time. It was a game ready meal that I was thankful to have and even if you are not a vegetarian, it is worth a try. 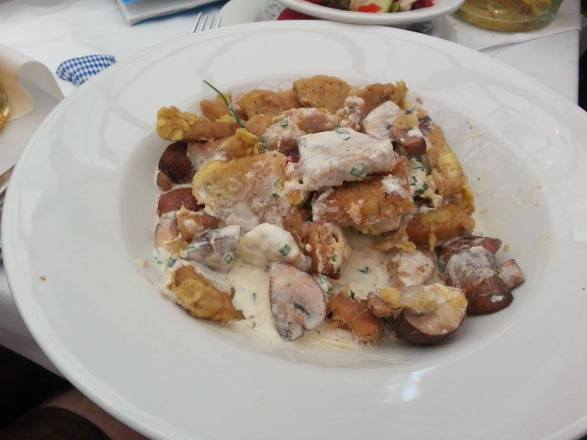 So, no matter if you choose to follow the rules or not, Oktoberfest is an experience you will never forget while you enjoy one of the best times of your life. Prost!

2 Comments on “The Do’s and Dont’s of Oktoberfest, Munich”